Bloomfield puts the icing on the cake 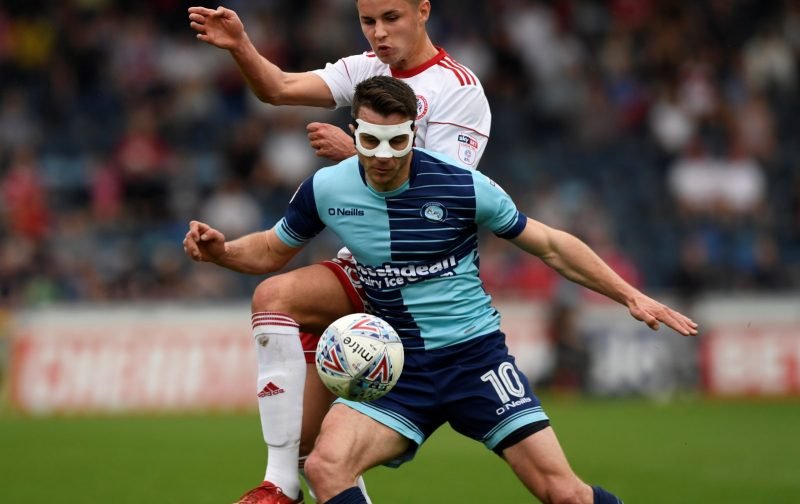 Vital would like to thank Dale Jenkins for the following report.

In a fitting end to the season, it was long serving midfielder Matt Bloomfield who scored the winner to top off a quite fantastic promotion campaign as Wycombe Wanderers deservedly beat Stevenage 1-0 at Adams Park.

Just over four years ago, 929 Wycombe supporters travelled down the M4 and M5 expecting to see their team relegated, crushed by a defeat to Bristol Rovers the week previous and requiring favours from either Oxford or Mansfield. What relegation would have meant for the club has been speculated on since but non-league football and the financial implications of it would have been perilous.

Gareth Ainsworth kept the faith, and fate had it that a Wycombe win coupled with a huge goodwill gesture from Mansfield saw the Chairboys given a reprieve as they survived on the final day of the season.

Since then Ainsworth has done a remarkable job to turn the club around, coming within a whisker of promotion the next season after a cruel penalty shoot-out defeat at Wembley against Southend following on from being denied automatic promotion on the final day. If truth be told though, the club would have been ill prepared to go up to League One at that point. Following two seasons of narrowly missing out on the playoffs, it just felt like this season was Wycombe’s time.

Ainsworth has slowly but surely crafted and constructed a squad filled with attacking talent and brimming with heart and commitment throughout. It has been a thrilling season with 79 league goals entertaining the fans and although 60 were shipped at the other end, there is no doubt that promotion is fully merited. It truly has been a season to remember.

There was a slight danger that despite doing such a sterling job on a small budget, Ainsworth could have developed a reputation as a bit of a ‘nearly man’. It would be a harsh label to tag on him but after the Morecambe collapse and subsequent Wembley heartache in 2015, valiant cup efforts against Tottenham and Aston Villa that fell just short and the two previous seasons missing out on the playoffs, Wycombe needed to show their bottle this time. This was the year to deliver and the playing and coaching staff did it, and the best thing about it is that they all totally deserve it.

There was just the one change from the team that beat Chesterfield to secure promotion, with Craig Mackail-Smith out through injury and replaced by Paris Cowan-Hall who played as the central striker in the usual 4-3-3 formation.

At a sun-drenched Adams Park, it was party time before, during and after the match for the 8,802 supporters that packed out the stadium. Even the 240 Stevenage fans joined in with the fun.

The first half was totally dominated by the hosts with Stevenage not even managing an effort on goal as Wycombe were unusually forced to attack the Valley End.

The opening chance came on 8 minutes when a raking cross-field ball from Adam El Abd found Bloomfield who brought the ball down with a sublime touch and pulled it back for Cowan-Hall who dragged a mishit shot wide.

Moments later there was nearly an own goal when Tyson raced at Chris Whelpdale and saw his cross touched agonisingly wide by Jack King with the terrace willing the ball into the net.

It was one way traffic and no surprise when Wanderers led on 21 minutes. Relentless pressing from both Jacobson and Williams helped to win possession in the final third and Bloomfield was given an age to stroll in towards goal and slot the ball through the keeper’s legs with a defender also unable to clear in time on the line.

As the half progressed Cowan-Hall hit another effort over the bar following excellent work from Harriman and after a good advantage was played by referee Martin Coy.

It was Bloomfield who was in the thick of the action most of the time, pulling the strings in midfield and finding pockets of space that Stevenage struggled to handle.

The visitors made two changes at half time but it made absolutely no impact as Wycombe remained comfortable throughout.

The lead could have been doubled after 55 minutes but a looping shot from Cowan-Hall hit the bar and his header on the rebound was cleared off the line.

Shortly afterwards Bloomfield was substituted to a huge standing ovation by the crowd, and replaced by Marcus Bean who was given a huge reception of his own.

With the game petering out, Scott Brown was replaced by Yves Ma-Kalambay after 65 minutes. Brown had been virtually redundant throughout the day and was given his moment in the scorching sun as the crowd once again rose to its feet in appreciation.

It was champagne football now, and Sido excels in that department, one delightful piece of skill seeing him pirouette past three opposition players with the minimum of fuss.

There was one final change and it had to be the Beast – replacing Randell Williams after 77 minutes, entering the pitch to another almighty roar.

There was little action left to speak of. Bean dragged one wide and a Jacobson free kick soared over. Meanwhile, Stevenage actually managed their only effort on target with a few minutes remaining. A deflected shot was watched closely by Ma-Kalambay who turned it away with his leg before giving a wry smile to the Valley End.

It is somewhat ironic that a defence which has been leaky for much of the season has helped get the Blues over the line and they enjoyed another well deserved clean sheet today, their third in the last five matches.

As referee Coy brought proceedings to a close, fans rushed onto the pitch in jubilant scenes as Wycombe celebrated their return to the third tier in style. What a season it has been.