The Blues are going up 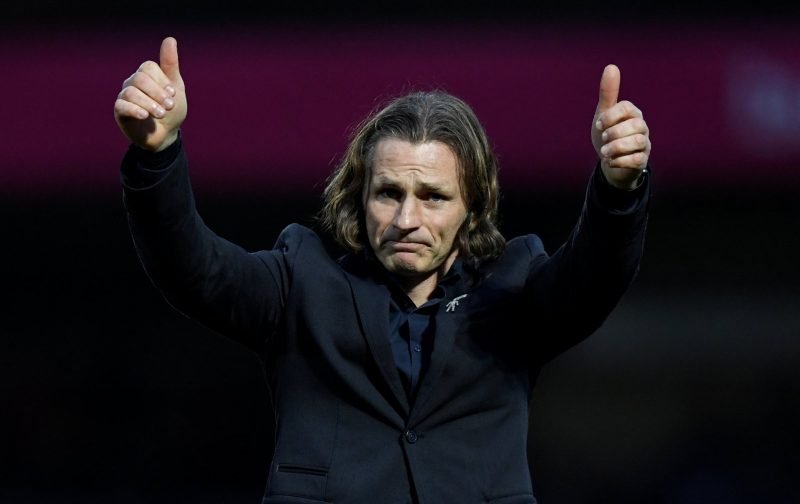 Vital would like to thank Adam Clift for the following report

The Chairboys will be playing League One football next season after a Dom Gape winner, his first goal of the season, and losses elsewhere for Exeter and Notts County secured automatic promotion with a game to spare.

With the other scores already going their way, Wanderers fell behind when the ball rebounded in off of Michael Harriman, after the Spireites’ initial effort had hit the post, but a Nathan Tyson equaliser just before half-time set Wycombe on their way. And when Gape crashed in a winner it was pandemonium in the away end as 1,131 travelling fans began to party.

Gareth Ainsworth made four changes to the side that lost heavily to Accrington Stanley last week. Sido Jombati returned from injury in place of Nathan McGinley, Luke O’Nien was also fit again and slotted into midfield with Gape and Matt Bloomfield, who was fresh from extending his stay at the club for a further two years.

Randell Williams came into the attack to partner Nathan Tyson and Craig Mackail-Smith, who had also both signed new contracts this week. There was a space on the bench for Adebayo Akinfenwa, who clearly wasn’t fit enough for the starting line-up.

Wanderers started with intent, Tyson firing a volley high and wide in the first minute, before Bloomfield shot just past the post with his left foot.

Tyson was in the thick of all the action, getting some joy out of the Chesterfield right-back and also having a header that was comfortably gathered by Aaron Ramsdale in the Spireites’ goal.

News had already filtered through that Exeter were two down against Stevenage, and when Notts County also fell behind at Grimsby, things seemed to be going well.

It wasn’t all plain sailing for the visitors. Chesterfield looked threatening too, with Jerome Binnom-Williams proving to be a useful outlet down their left.

Scott Brown then had to be at his best to keep the scores level. Joe Rowley had an effort from the edge of the area with the outside of his boot, which Brown did superbly to push wide.

Back up the other end, Joe Jacobson hit a free-kick narrowly wide via a deflection, while skipper Adam El-Abd’s header from the resulting corner was an easy save for Ramsdale.

Kristian Dennis has 20 goals this season, and it was nearly 21, but his header was flicked straight at Brown. Sido Jombati then got a crucial block on a goal bound effort.

Chesterfield were having a good spell and they eventually got their reward. Right back Bradley Barry down the wing after El-Abd could only slow the attack rather than halt it. His shot across goal beat Brown and crashed against the inside of the post, but came back and rebounded in off the retreating Harriman. There was nothing he could’ve done about it.

With results still looking favourable at both Stevenage and Grimsby it seemed typical Wycombe to not take advantage. However as we entered first half stoppage time they got themselves level.

A nice spell of possession led to the ball finding Luke O’Nien and he did superbly to skip a couple of challenges before drilling it across the box where Nathan Tyson was ready to poke home.

It was obvious this was a huge goal, and when the whistle was blown for half-time the Wycombe players sprinted off the pitch with an obvious spring in their step. They looked ready to go and get a winner.

Just minutes into the second half they so nearly took the lead. A Jacobson corner was met by the head of Jombati and it seemed to be heading into the bottom corner, but Ramsdale got down and saved brilliantly.

Wycombe would have no doubt been aware of the other scores and knew a goal would send them up if things remained the same. Exeter conceded a third as ex Wanderer Alex Revell completed his hat-trick.

Tyson was inches away from doubling his tally for the afternoon when he almost got a touch on a low Jombati cross. Binnom-Williams fired one over at the other end as the game opened up a bit.

With a quarter of the game remaining Ainsworth looked to his bench for the first time, Paris Cowan-Hall replacing Randell Williams who’d had a quiet afternoon.

Moments later it should’ve been 2-1. O’Nien lofted a ball over the top, Mackail-Smith beat the offside trap and was through, but his touch was poor and it allowed Ramsdale to close the angle and shut him out.

Cowan-Hall was straight into the action after his introduction, and he curled one millimetres wide after Mackail-Smith had laid it off to him. You had a feeling it was coming.

El-Abd headed a corner wide and Tyson fired over. But then with fourteen minutes left the crucial promotion winning goal arrived.

Cowan-Hall did excellently again to win a corner. Jacobson swung it in, El-Abd kept it alive, and when the ball broke loosely Gape ran onto it and fired into the top corner with the aid of a slight deflection.

The players went wild, the fans were delirious. It really was incredible scenes at the Proact Stadium. If Wycombe could hold on, either Exeter, who’d got one goal back, or Notts County would need to score twice to prevent the Chairboys getting the job done today.

Jak McCourt came on in the aftermath of the goal celebrations, and he was immediately in the action. His shot deflecting and looping up over Brown, but thankfully only onto the top of the crossbar.

Sam Saunders came on for Bloomfield with minutes left on the clock. Bloomfield had rolled back the years and had a brilliant afternoon.

A Notts County equaliser made the nerves even worse, but they had to win to keep their hopes alive. Four minutes of stoppage time were added for Wycombe to defend, as the fans began to really believe.

There was soon a roar from the away end, as Notts County conceded again, confirming that if Wycombe could hold on then promotion would be guaranteed.

In the final minute there was one last heart in the mouth moment when Chesterfield won a corner, but it was partially cleared and the resulting half volley whistled just over the top of Scott Brown’s goal. A huge sigh of relief came from everyone associated with Wanderers, and the chants of “We are going up” broke out.

And sure enough, when Brown took his kick the referee blew for full-time and the celebrations could officially begin. Wycombe had done it. Gareth Ainsworth and his players were automatically promoted.

An inevitable pitch invasion followed by supporters and staff all hugging each other. Ainsworth ending up on supporters shoulders singing along to the chants from the fans.

The players eventually made their way down the tunnel as the fans climbed back into the stands. The squad were soon back out though to enjoy the occasion even more as nobody was leaving the ground anytime soon.

It eventually came to an end and the players went back to celebrate amongst themselves, while the fans did the same. No doubt there were some sore heads this morning.

Stevenage visit Wanderers next weekend in the final game of the season which will thankfully be a celebratory, stress free affair as Adams Park will host its very own party.